stuff in the Merrimack - Hydroplane racing

Boy is this a blast from the past! I haven't seen hydroplane races since the early 1960s or maybe it was the late 50s. My Dad was a fan and I remember him taking me to see a race, but I don't think it was on the Merrimack. I'll have to see if my mother or the brother closest to me in age remember where it was. Anyway, apparently hydroplane racing is back and it's happening in Haverhill this weekend.

stuff in the merrimack -- sturgeon

Hope Merry Mac (get it?), the Haverhill mascot sturgeon, welcomes the out of state fish.
No comments: Links to this post
Email ThisBlogThis!Share to TwitterShare to FacebookShare to Pinterest

The refurbishment of the runway at 2B2 has finally happened. I noticed the work crews on the runway on my way to the refuge. Check out Alex Hasapis' blog entry,
2B2 Flyby: Do You Believe in Miracles?, for pictures of the newly refurbished runway.

In other news, I forgot to mention in my last couple of posts that the sign marking the location of the original Plum Island flying field and Augustus Herring's historic flight is now finally installed at Parking Lot 2. See my earlier entry, things that fly, for the story about the 100th anniversary of flight on Plum Island and the historic signage on the refuge.
No comments: Links to this post
Email ThisBlogThis!Share to TwitterShare to FacebookShare to Pinterest

Coffee of the Day: Sumatra
Invisi-bird Status: Totals for the end of the season: Refuge Beach: 13 pairs, 31 fledglings; Sandy Point: 3 pairs, 3 fledglings. Number actually seen by me: none today.

The piping plovers on our little stretch of beach did extraordinarily well this year despite June high tides and all manner of natural obstacles to survival. Read those numbers again: 13 pairs and 31 fledglings. My quick mental calculation is roughly 2.4 young fledged per pair. (OK, I just got out the calculator and came up with 2.38461538 -- so I'm darn close.) That is better than replacement rate! I feel like I should do a happy dance on the beach.

I don't have any info on the least terns this year. They nest and depart a little later than the piping plovers. I went for a walk at Sandy Point last night and noticed that the least terns there are still acting like they've got young to provide for though I didn't see any chicks. I did see plenty of adults. The picture below is a little blurry because I used the digital zoom on top of the optical zoom on account of being far enough away that I thought I wouldn't bother them. Though I was quite far away, some of them noticed me and tried to mob me. Fortunately I did not get covered in tern poop. 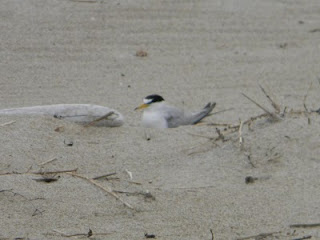 I tried on Thursday and on Friday for the scissor-tailed flycatcher that's been hanging out at Sandy Point for the past week or so, but with no luck. According to the postings on massbird.org, it has molted its long tail feathers but is still easily recognizable. Both Thurs. and Fri. late afternoon expeditions were fun though, with least and common terns, greater and lesser yellowlegs, sanderlings, snowy egrets, and of course the ongoing swallow spectacle. There are starting to be warblers around too. In addition to yellow warblers (which do nest on the refuge despite visitor disbelief) there was one common yellowthroat and a black and white warbler. This seems early for the fall warbler migration but everything is early this year.

There's always a lot to see in any season besides the avifauna. You've got your fauna, flora, and whatever the word for the fungus kingdom is (I think I remember fungi getting their own kingdom several years ago). 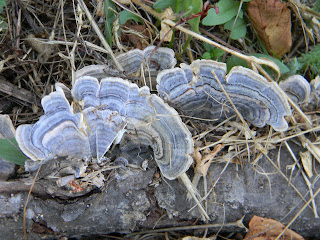 This reminds me of the poster about the life, death, and rebirth of a tree. The poster hangs in the ladies room at headquarters. 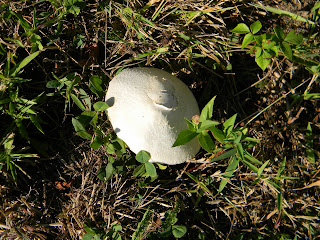 These things look like stray golf balls from a distance but quite scary up close. 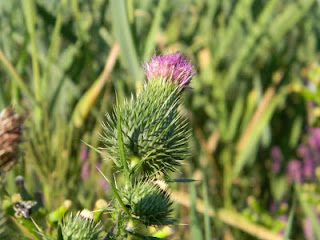 Shouldn't this thistle have a goldfinch perched on it? 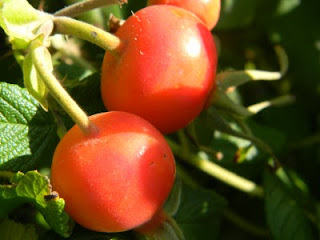 These rose hips are roughly the size of cherry tomatoes. Maybe a little bigger. 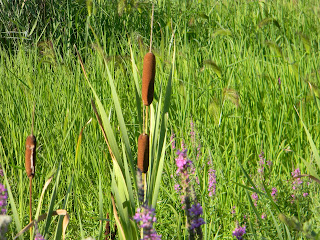 How come invasive plants are so pretty? 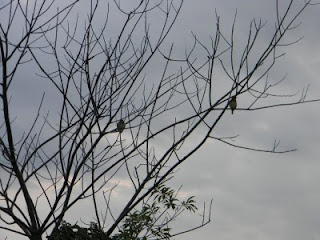 Cedar Waxwings against cloudy sky.
3 comments: Links to this post
Email ThisBlogThis!Share to TwitterShare to FacebookShare to Pinterest

changing seasons on the refuge 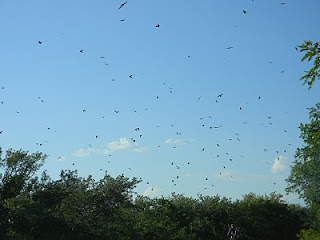 The first thing I notice on entering the refuge is that Jean's iconic drawing of the hungry man-eating greenhead has been replaced by the iconic tree swallow without health insurance. Why are the swallows worried about health insurance? 'Cause they are so thick in the air and on the road that inattentive drivers might easily hit them. Watch out for swallows swirling in Brownian motion all around you. The photo doesn't do it justice. You have to experience it firsthand. Swallows are the sky, the air, the entire environment. They're not in it, they are it. 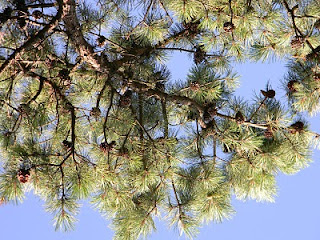 For today's entry I thought I'd show you one of the non-beach parts of the refuge, the Pines Trail. While the beach is full of sunbathers, surfers, trespassers, and fisherfolk, and the birders are all at Sandy Point looking for the scissor-tailed flycatcher, the Pines Trail offers: 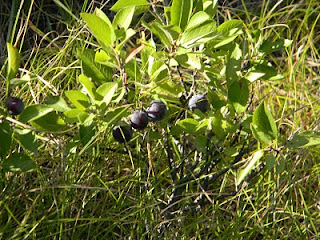 A walk all the way around the trail reveals beach plums in various states of ripeness. It seems like the ones on the north and west (or northwest) sides of the trail are riper than the ones to the south and east. The easternmost plum bushes had the least ripe plums. I never noticed that before. 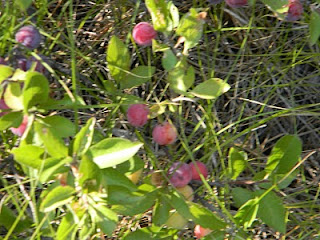 Plum Island gets its name from the beach plum, Prunus maritima, not from the purple sand. 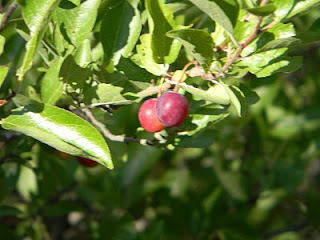 Sometimes people confuse Prunus maritima with Rosa rugosa, the beach rose. Both make great jam. I can sort of see how the plum could look like a rose hip when it's still in the red stage before it turns deep purple. 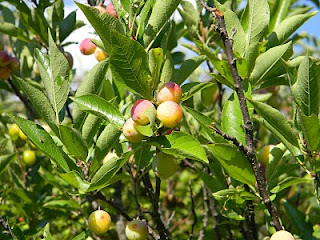 It really is a whole 'nother season now.
2 comments: Links to this post
Email ThisBlogThis!Share to TwitterShare to FacebookShare to Pinterest
Newer Posts Older Posts Home
Subscribe to: Posts (Atom)