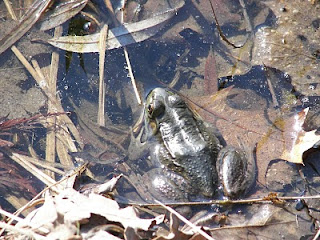 First frog sighting of spring!
Last weekend Nancy and I spent hours and hours at Blithewold enjoying the amazingness of this early spring. Hordes of dark-eyed juncos flitted around among the newly arrived red-winged blackbirds. Black-capped chickadees were everywhere doing the spring fee-bee call. Sometimes they mixed in on the same shrubs with the juncos just the way they do in winter. The most fun sighting we had was a very active red-bellied woodpecker. We heard it first and weren't sure what it was. I don't think I'd ever heard one before. It sounded a bit like a cross between a northern flicker and a pileated woodpecker. I finally found it in a dead tree (where else?) drumming away and stopping to call every once in a while. I got A+ looks and just enjoyed watching it. 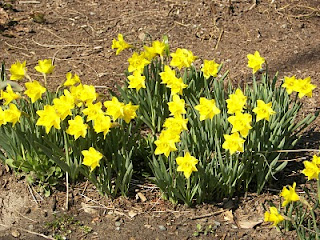 Mini-daffs!
Skunk cabbage was coming up everywhere. The mini-daffs were in bloom. We even found one full-sized daffodil in bloom already. At this rate, I'll bet the daffodils peak before the scheduled Daffodil Days starting April 10. There were even frogs peeking up out of the water garden ponds already. Spring has definitely busted out all over Blithewold. In places, the grounds are still very wet from the flooding so my shoes got really muddy, but who cares? It's spring. 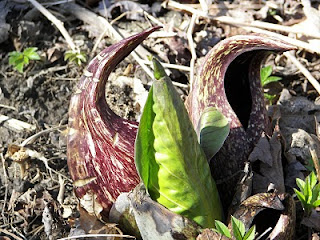 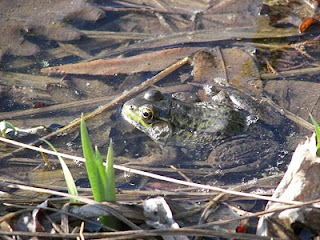 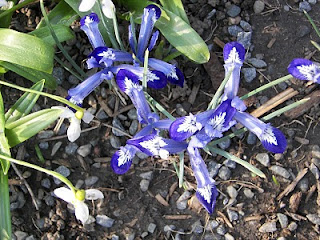 I recently picked up my copy of A Summer of Hummingbirds: Love, Art, and Scandal in the Intersecting Worlds of Emily Dickinson, Mark Twain, Harriet Beecher Stowe, and Martin Johnson Heade by Christopher Benfey after having abandoned it in in the midst of Mark Twain's visit to Chillon. Bored with Byron I guess. Anyway, this time I skipped to the next chapter "Birds of Passage". It's got lots of quotes from Twain's account of Nicaragua, including this wonderful bird description: "a prodigiously tall bird that had a long beak like a powder horn, and curved its neck into an S, and stuck its long legs straight out behind like a steering oar when it flew." What could that be?

I flipped to the footnote, which only gave the source of the quote, not the identity of the bird. The wheels of my mind began to turn. OK, sounds kinda like a stork of some sort with the long legs but wood storks fly with the neck extended, not curved. What other stork-like bird would be found in Nicaragua? I looked up a list of birds of Nicaragua. Bingo. Gotta be a jabiru. That's a stork with a curved neck and very long legs.

Gotta get me to Nicaragua or Belize or someplace down there to see a jabiru in the flesh.
No comments: Links to this post
Email ThisBlogThis!Share to TwitterShare to FacebookShare to Pinterest

footprints in the dunes, umm, make that footwear

During that window of sunny weather between flood warnings last week, I made it out to the refuge for a little birding, a little walking, and a little photography. At Lot 7 I watched a flock of about 15 common eiders and a lone horned grebe bobbing in the waves off Emerson Rocks for awhile. Along the boardwalk at Lot 6 I came face to face with a northern shrike perched on a bare branch. We're talking naked eye, my binoculars don't focus close enough, distance. It sat there calling, showing off its whole vocabulary for me: "kdldi", "plid-plid", "fay, fay", "reed, reed, reed", "shraaaa". Gee, I should take a picture. I turn on the camera. Shrike hears the camera noise and takes off deep into the thicket of shrubs. Dang.

I continued my walk up the boardwalk to the beach, noticing what sorts of junk had made it up from the beach over the foredune. A distinct pattern emerged. Footwear. 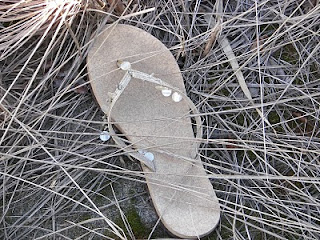 Closest to the road was a flip-flop, nicely decorated with shiny dangler things. Right foot. Looked like it had been there some time. 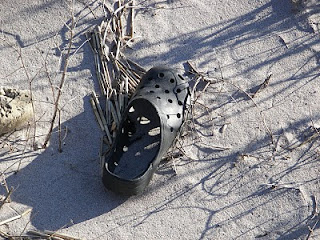 Then there was some kind of ventilated clog, evidently designed to let the water drain from it as the wearer walked on the beach. Right foot. Is a pattern emerging? 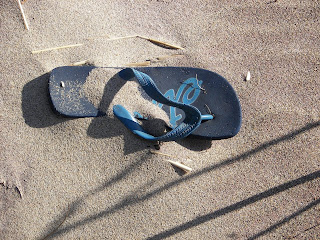 Closest to the top of the foredune was a more expensive, trendy kind of flip-flop. Left foot. So, I guess they're not all right ones after all.

Footwear plays a prominent part in the study of ocean currents (remember the great Pacific Nike spill of 1990? See the Wikipedia entry for Hansa Carrier for a summary of that one.) To my knowledge, no one has used footwear whereabouts in the study of dune migration. Hm, there's a science project for some local kid in that I'm sure.
No comments: Links to this post
Email ThisBlogThis!Share to TwitterShare to FacebookShare to Pinterest

want to be a plover warden?

Like to be outdoors? Like to talk to people? Like birds? Especially piping plovers?
You too can be a plover warden. Check out the plover warden orientation at Parker River National Wildlife Refuge on Sunday, March 14, 10 a.m. to noon. Orientation is open the public. Attendance does not obligate you to volunteer. No registration required. Meet at the Refuge Visitor Center.

From April through mid-August (closure ends when the chicks have fledged), the refuge beach is closed to protect the nesting piping plovers. Plover wardens protect the beach, educate visitors, and get to enjoy the beach at the same time. Shifts are 4 hours long but you can volunteer for a partial shift. Despite the fact that some of us are so crazy as to be out there in blizzards and gales, that's not required. :-)

Don't miss a chance to help save the cutest beings on the planet.
No comments: Links to this post
Email ThisBlogThis!Share to TwitterShare to FacebookShare to Pinterest

Speaking of "stuff in the Merrimack" as this blog often does, stuff comes out of the Merrimack when it floods...

As far as the extremely local scene goes, the Shawsheen is pretty high still.
No comments: Links to this post
Email ThisBlogThis!Share to TwitterShare to FacebookShare to Pinterest

If you want to volunteer to be a plover warden this season, come to the orientation on March 14 at PRNWR visitor center at 10:00 AM. You don't need to register ahead of time, just show up. Showing up does not obligate you to volunteer. However, Unit 3 and Unit 11 just might inspire you to join us on the beach.
No comments: Links to this post
Email ThisBlogThis!Share to TwitterShare to FacebookShare to Pinterest
Newer Posts Older Posts Home
Subscribe to: Posts (Atom)