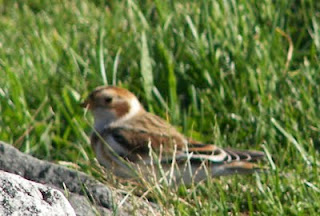 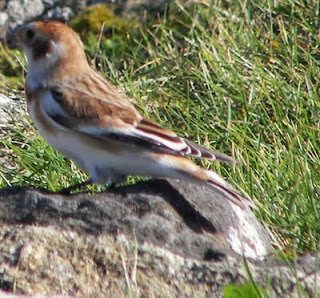 So, we were down at Colt State Park in Bristol, RI looking at the newly arrived brant -- hundreds of brant traditionally winter there -- and I spotted this lone snow bunting on the edge of the grass by the rocks.

Other signs of winter were dark-eyed juncos and, of course, the brant. 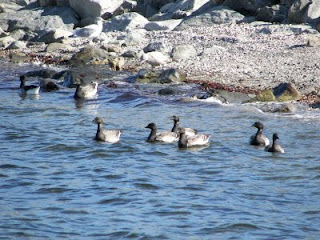 A single laughing gull in with a flock of herring gulls and ring-billed gulls kept its distance from the herring gulls but didn't seem as intimidated by people. 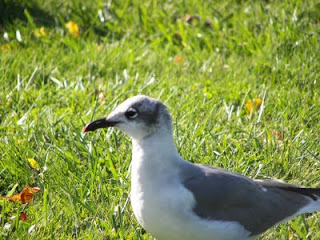 stuff in the Merrimack (imaginary)

Apparently the Merrimack River has its very own monster, Merry Mac. That counts as "stuff in the Merrimack" even if imaginary. One of the giant shoe sculptures up for auction in Haverhill depicts said monster. It would be really cool if the high bidder managed to keep it in the Merrimack Valley.

I tweeted earlier today about the article in boston.com's The Green Blog about Rachel Carson's Massachusetts ties. I was surprised to read that Carson's connection to Massachusetts and in particular to Parker River National Wildlife Refuge on Plum Island is not widely known in the Boston Globe's archives and among the people the author talked to. I thought that after USFWS made a big to-do of Carson's 100th birthday in 2007 more people outside of the refuge staff and volunteers were aware of it. I guess not, so I figured I'd blog a little about it.

Rachel Carson visited the Parker River refuge in September 1946. It was still fairly new as part of the National Wildlife Refuge system, having been established in 1942. She surveyed the bird life there and wrote about the refuge. In her Parker River entry in the Conservation in Action series, Carson described the refuge as "New England's most important contribution to the national effort to save the waterfowl of North America."

On reading it, the most interesting thing to me is the extent to which refuge management practices have changed and the changes in the situations of American black duck and Canada goose. Her description of the road as tortuous and often impassable is still pretty accurate. I've had other volunteers tell me I was abusing my car by driving it south of Hellcat after a rain storm. She also mentions the road sometimes being flooded at high tide. I've only seen that once in my life, but it was pretty impressive. The dunes have built up a lot since then.

The other thing I got a kick out of in the pamphlet is the detail that at that time (1946) Essex County had records of 357 different species. To make it clear how impressive that is, she cites Cape May: "To give some meaning to this figure, consider one of the best known birding grounds in eastern United States, Cape May County in New Jersey, where the record is 318." I know I should know what the current total species count is, but I don't. All the refuge materials just say "more than 300 species". Must remember to ask Tom Wetmore, the knower of all Plum Island bird data.

Note: The Parker River National Wildlife Refuge pamphlet in the Conservation in Action series seems to have vanished from the USFWS Rachel Carson page but it is available at DigitalCommons@University of Nebraska.

The Green Blog talks about an upcoming new biography by called Days of the World, Years of the World: The Life and Legacy of Rachel Carson(working title) in the works for the 50th anniversary of the publication of Silent Spring. There have been so many Rachel Carson biographies over the years and at least some of them have mentioned PRNWR. No, I have not read all of them. However, I remember reading The Gentle Subversive by Mark Lytle back in 2007 when it came out and very much enjoying the narrative style of biography. It made me see Rachel Carson as a person not just an icon. Way back in time I remember going to an environmental writers conference at the New England Aquarium and hearing Linda Lear who was either working on or had just finished (I forget, it was in the late 1990s) Rachel Carson: Witness for Nature.

I think both the Linda Lear biography and the Mark Lytle biography quote a letter in which she mentions "Audubonites" along with mud and sand as features of a strenuous day at Parker River NWR. I'm sure even back then birders stopped dead in the middle of the S-curves. :-) According to the letter quoted, she felt "sunburned, black and blue, mosquito-bitten, and weary" at the end of each day there. You can tell she visited in September and not July by one thing missing from her list: greenheads. I wonder what she would have said about them.
1 comment: Links to this post
Email ThisBlogThis!Share to TwitterShare to FacebookShare to Pinterest Emerson Rocks with Eider
Originally uploaded by Captain_Peleg
Coffee of the Day: George Howell Select Espresso Sorrento blend (I bought a pound)
Bird of the Day: dark eyed junco
Strange Wrack Item of the Day: saltmarsh hay that has a beak

So it's the last day of my vacation and the familia loca doesn't need me for anything and the Ex-Pat is on his way back to Dubai. Must be time for a walk on the beach.

It's impossible to go anywhere on the refuge today without seeing dark eyed juncos. They have arrived en masse. Hundreds of them. They even outnumbered yellow-rumped warblers. This is a sure sign that the season has changed. Betcha we have the first frost tonight. 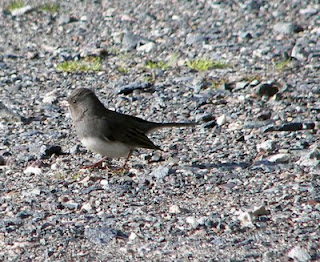 Of course, they were too busy flying around in search of food to pose for me except for these two guys who were willing to pose as long as the background was the same color that they are. 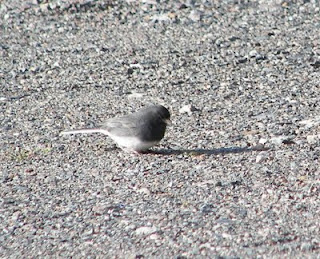 There were plenty of common eiders around too, but not nearly as many as juncos. The male eiders were looking very funky and alternative in their non-breeding plumage. 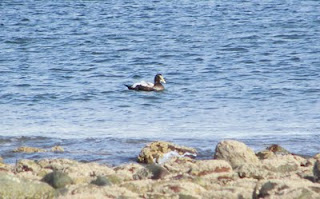 From a distance, I saw this thing that looked like a gull resting on the beach. I thought it might be injured and went to have a look. Silly me. It's just saltmarsh hay with a beak. 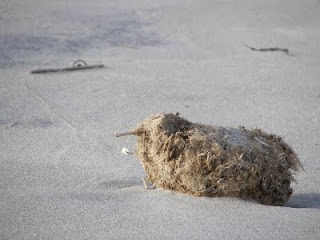 Did that occur naturally or is it art?
No comments: Links to this post
Email ThisBlogThis!Share to TwitterShare to FacebookShare to Pinterest

the wrack is peeping! 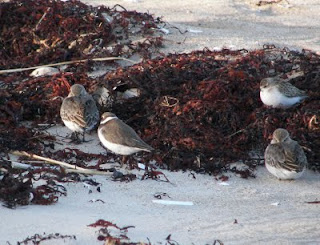 Coffee of the Day: George Howell Select Espresso Sorrento blend (brewed and consumed at home, not on the beach)
Bird of the Day: Western Sandpiper
Wrack Item of the Day: Peeps! (the shore bird kind, not the marshmallow kind I famously mailed to Bosnia)

Needing to burn off some adrenaline from Red Sox playoff tension, moving Mom stress, Gray Cubicle stress and so on, I went for a walk on the beach. I parked at lot 6 and encountered yellow-rumped warblers all over the place -- in the bushes, in the trees, on the ground, under the boardwalk... I'm used to having brown thrashers or mourning doves fly up from under my feet but this is the first time I've experienced that with a yellowrump.

From Lot 6 I started walking south toward Sandy Point. Just past the no-driving-past-here sign, I spotted three semipalmated plovers foraging in the wrack. 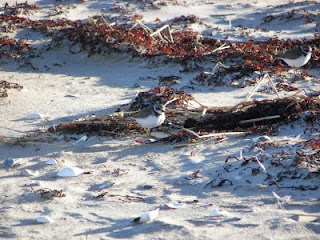 I sat down on a log to watch them and try to take some pictures without disrupting their all-important fueling up for the rest of the migration. One of 'em, I swear was posing for me. It kept doing all the cool plover postures right where I could get the best view. :-) 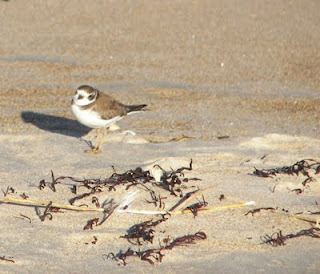 I'm soaking in the wind and the surf and the sun when the wrack starts peeping all around me. Seriously, the peeping is coming from the wrack. Holy shorebirds! I'm surrounded on all sides by peeps hunkered down in the wrack! At first they seem to be mostly semipalmated plovers, at least 15 of them at first count. 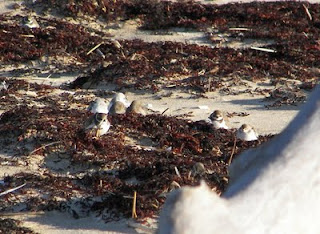 But, see those rocks in the wrack? Not rocks. Sleeping peeps.
There's a shorebird ID workshop breaking out in the wrack! BTW, note this is literally wrack -- you can see it's mostly bladder wrack. 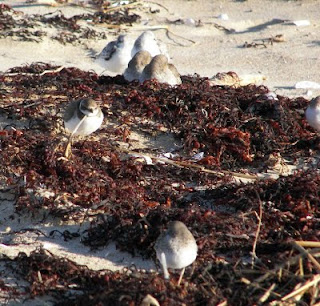 The sandpipers were mostly hunkered down with bills tucked into their feathers while the plovers moved around almost manically. 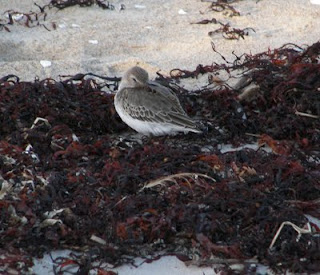 A small group of semipalmated plovers and semipalmated sandpipers started walking up toward the dunes. As I watched them, a sanderling joined them and then passed the crowd as if it were a race. Hmm,, a bike race, the tour de plage, with semipalmated peloton and sanderling breaking away?

The best surprise of all was a Western Sandpiper, which popped out of the wrack, stretched its wings and showed me its distinctive slimmer slightly down curving bill as if to say "Hey. look at me, I'm not one of these ordinary peeps!"

I lost count at 30 of the semipalmated plovers, about 8 to 10 semipalmated sandpipers, 4 sanderlings, and either 1 or 2 western sandpipers (might have counted the same one twice as they and I moved down the beach).

It was a low total species count kind of day overall, with the aforementioned yellow-rumped warblers and peeps plus a lot of double-crested cormorants, two snowy egrets, 1 great egret, and two turkey vultures. But who cares about the list when the wrack is peeping all around you?
1 comment: Links to this post
Email ThisBlogThis!Share to TwitterShare to FacebookShare to Pinterest

yet more stuff in the Merrimack

So, when they finally pull out all the stolen cars then is Haverhill going to drink the water?
No comments: Links to this post
Email ThisBlogThis!Share to TwitterShare to FacebookShare to Pinterest
Newer Posts Older Posts Home
Subscribe to: Posts (Atom)