Saturday's shift as north plover warden was extremely rewarding. The whole beach at Lot 1 was closed because biological staff had seen piping plover chicks feeding in that area.  Staff were eager to know if there were still chicks feeding there, as they will keep it closed until no chicks have been seen feeding there for 3 days. My mission was to be on the lookout for chicks.
Coffee of the Day: Tanzania Peaberry
Bird of the Day: Piping Plover
Weird Wrack Item of the Week: a dead striper
Invisi-bird Status: As of Friday: Refuge: 26 pairs, 4 nests, 25 chicks, 7 fledged; Sandy Point: 6 pair, 1 nest, 5 chicks; Newbury town beach: 1 pair, 3 chicks. Number actually seen by me: 6! 4 chicks, 1 adult, 1 possible fledgling (or about to fledge).

There were indeed chicks.  First I spotted one older chick that fed along the waterline for awhile and then ran off somewhere out of sight. Later on, 4 chicks and an adult put on a show of all the cute plover behaviors.   A running piping plover chick is a amazing sight to behold.

Visitors were mostly  well behaved and responsive. The first visitor I talked with was a guy who lives near the nest on the town beach. He said he hadn't seen the chicks in a few days and wanted to know if I had any news from biological staff. I also talked to a family from Chicago who were staying at the hotel, they were very interested in the plovers and our efforts. Nice to be appreciated :-)
In addition to the cutest birds on the planet, I got to see a major tern feeding frenzy -- with common, least, and even roseate terns diving after small fish who were fleeing from bigger fish.  One juvenile common tern (still a fair amount of brown wash on the feathers) flew after an adult that was carrying a fish. When the adult landed, the juvenile landed right next to it and begged. The adult ate the fish.

A cormorant surfaced with a small flounder in its bill only to have a great black back swoop in and steal it in a textbook demonstration of kleptoparasitism.

On the drive back into Newburyport, I spotted the rare Aptenodytes Joppaae on an ice floe in the Merrimack. I think my last sighting of Joppa Penguin was in 2009.

Coffee of the Day: French Roast Colombian
Bird of the Day: piping plover
Weird Wrack Item of the Week: brown tiger beetle -- actually, it was on my neck, not in the wrack, when I spotted it.
Invisi-bird Status:  As of July 3: Refuge beach: 23 pairs, 16 nests with eggs, 4 pairs have fledged 7 chicks. Sandy Point: 4 pairs, 2 nests with eggs, 1 pair with 4 chicks. Newbury town beach: 1 pair with 4 eggs. Number actually seen by me: 3.
Saturday's shift was hot, humid, and hazy.  The greenheads were out in force but were leaving me alone, thank goodness. What breeze there was came from the land side, not a sea breeze. With the haze offshore, it was sometimes hard to distinguish between the sky and the water. I got used to seeing boats hovering in the sky over the horizon. It rained a little bit off and on too, but not enough to drive anybody off the beach.


Lots of visitors were asking good questions about piping plovers and wanting to know if they could see them. A total of 3 adult piping plovers graciously made themselves visible over the course of the morning.  A beach-goer/birder had a scope, which made it lots easier to show off the invisi-birds. But, heck with my invisi-bird spotting superpowers, I could see them with the naked eye. See if you can find the invisi-bird in the photo below.
One visitor came over specifically to tell me that Go Fish day had gotten him hooked on fishing and he wanted me to let "the guy with the mustache" know. I'm not sure which of the guys he meant, but I will pass the word along to the refuge staff. Anyway, this guy is so excited by fishing that he sold his golf clubs to buy fishing gear.
In addition to the normal sort of double wrack line composed of seaweed, grass and marine debris, today there was a line of mostly winged ants. A lot of them appeared to be dead, but some were still alive. I think this is what enticed the invisi-birds to show themselves, because they spent a lot of time along the "ant line".

At one point I felt something on my neck and was sure I was about to get my first greenhead bite of the season, but when I flicked it away I saw that it was a beetle. It landed in the sand at my feet and I tried to get a picture of it even as it was digging itself into the sand. While I was watching the beetle, an amphipod emerged from its hole in the sand, crawled a few inches, and buried itself again. Got the beetle photo. Didn't get the amphipod.


In other news, as I was leaving I met 61, who told me he caught the bonfire people! 15 teenagers. Excellent law enforcement detective work.

Then it was off to Newburyport for felafel, coffee, and books.
No comments: Links to this post
Email ThisBlogThis!Share to TwitterShare to FacebookShare to Pinterest

I got a couple of slightly differing but equally positive reports from refuge staff on the status of my favorite invisi-birds and their neighbors.

As I had mentioned before they did re-nest after the big waves in early June and we have some fledgelings.

Refuge Beach: Either 23 or 26 pairs, either 16 or 17 nests, zero chicks,  7 fledgelings
Sandy Point Beach: 3 pairs, 2 nests, 4 chicks. One nest was lost to predation at Sandy Point.
Newbury Town Beach: 1 pair, 1 nest.
Still none on the Newburyport town beach (the north end) -- this is a good thing, it's not a great place for plovers to nest or people to build houses (personal opinion based on what I learned about beach "erosion" in oceanography class).

Biological staff confirms that least terns are establishing a colony on the refuge beach -- I assume that's the one I noticed in the general vicinity of Lot 3 -- in addition to the one at Sandy Point.

In case you wondered, I am drinking Ethiopian Sidamo brewed here at my house, but purchased last week at PICR. 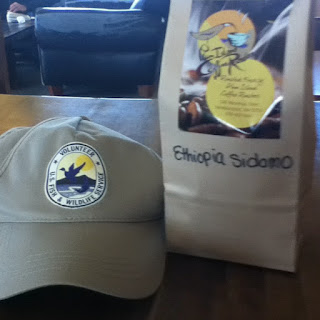 In other news, I did indeed write something about the wrack line for The Wrack Line. Stay tuned for the summer issue from the Friends of Parker River NWR.
No comments: Links to this post
Email ThisBlogThis!Share to TwitterShare to FacebookShare to Pinterest


Coffee of the Day: Ethiopian Sidamo
Bird of the Day: osprey
Weird Wrack Item of the Week: green plastic thing (see photo)
Invisi-bird Status: no update from biological staff. Number actually seen by me: one adult.
Coast Guard Assets: none
General Aviation Craft: lots of 'em including a stunt plane

I couldn't have asked for better birds or more cooperative visitors for a hot Saturday morning. The bird of the day has to be the osprey. As I was driving over the bridge onto the island an osprey flew over with a fish in its talons. When I got to the beach, two osprey were fishing right off the Lot 1 beach. I got good looks at all three of these magnificent birds. A visitor asked me whether "those big birds" were eagles, so I got to talk a little bit about ospreys in addition to piping plovers.

Judging from the footprints in the sand, someone had clearly entered and left the closed area before I got there. I'm guessing it was not biological staff or somebody would have told me.

All visitors were well behaved, even the ones whose iPods prevented them from reading the signs. I did have to intercept three of these iPod victims to keep them out of the closed area, but they were very nice about it. Many visitors were actually interested in piping plovers, so I got to give my whole life cycle spiel several times.

A single adult piping plover landed near the north boundary and worked its way up the beach from the water to the wrack line methodically employing several plover feeding methods, from foot trembling on the wet sand to fly-catching in the wrack.  There were several lines of small shells and tiny bits of wrack left behind as the tide receded and it was amazing to me to see the piping plover find tiny crustaceans to each in these mini wrack lines. I never, ever, get tired of watching piping plovers. They are the cutest thing on the planet.

Strange plastic things are always washing up in the wrack and Saturday was no different. I have no idea what this green plastic thing is, but it sure stood out.

I was hoping to catch a glimpse of the Blue Angels who were at Portsmouth, but I guess their show didn't start 'til later. I did however see a small vintage stunt plane doing loops, rolls, and drops out over the water. Several of the visitors watched it too. Another airshow! Oh, and there was a gull/tern airshow too when they went into a giant feeding frenzy as bluefish were running. Blues running in June is a tiny bit early, but everything is early this year. The greenheads are out early and were much in evidence at the gatehouse. The wind pretty much kept them down on the beach, though I did see someone swat one with a paperback book. Good thing they didn't try that with a Kindle :-)

It is definitely summer.