Stuff in the Merrimack -- Atlantic Sturgeon

this weekend at the Parker River Refuge

Friends of Parker River NWR annual meeting with program on owls on Saturday.

Refuge History Tour on Sunday, Jan. 10, 11 a.m. to noon. Meet at refuge Parking Lot 1. See the refuge web site for more info.
No comments: Links to this post
Email ThisBlogThis!Share to TwitterShare to FacebookShare to Pinterest Coffee of the Day: Sumatra
Weird Wrack Item of the Day: me?
Bird of the Day: American robin -- flock of about 2 dozen chowing down on winterberries near the granite marker field

The water in the marsh is very high today. I'm told it was even higher over the weekend during the storm. I took this picture from the parking lot next to the bridge onto Plum Island. The posts mark the edge of the parking lot.

To compare and contrast, here is the same haystack in October: 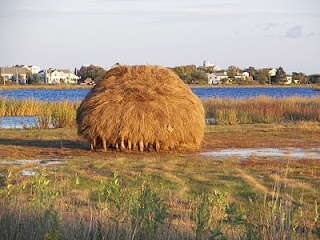 The hay is stacked on a hay staddle. I think this one was actually constructed as a demo/history lesson for Trails and Sails weekend back in September. Hay staddles, when the hay has already been removed to a barn or wherever, make perfect perches for wintering snowy owls. They like to hunt from low perches. The classic Plum Island snowy owl sighting is on a hay staddle in the Great Marsh. Snags, fallen logs, and other random pieces of wood are also popular with the Arctic visitors. The snowy I saw on New Year's Day was hunkered down in the marsh, not perched on anything. It was barely distinguishable from the chunks of ice sticking up from the water.

I didn't see any snowy owls today. There was not a lot of bird activity on the refuge or along the Merrimack River besides a lot of Canada geese and mallards at Joppa Flats. The best waterfowl I saw today were a pair of red-breasted mergansers in the river right outside Plum Island Coffee Roasters. There wasn't much open water on the refuge -- too much ice. I did see one American tree sparrow, a northern harrier, and a couple dozen American robins. The robins were all together in the trees/shrubs across from the granite marker field (just south of the north pool overlook) going to town on bright red winterberries ( Ilex verticillata - native to this area). They seem to be a favorite food of wintering robins.

Did I mention the water in the marsh was really high? How about another gratuitous photo of that haystack? The closeup gives a better view of the snow. 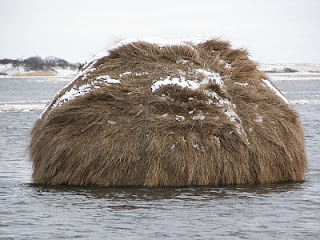 In a topsy turvy turn of events, it started to snow when I got back to downtown Newburyport after my refuge visit. It was just light snow, the kind you want to have when you're Christmas shopping or watching pond hockey.

By the time I got over to Salisbury Beach, the sun was going down. Not much bird action there either and the water in the river was up to the top of the boat ramp. 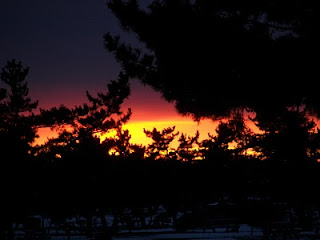 I searched Google News in my never ending quest for new things in the Merrimack River. I got a lot of stories about the recent storm. I was much more interested in the only ad that showed up:

I couldn't resist further exploration. A search on Shawsheen River got a few relevant hits but did not yield any ads. Searching on Shawsheen got me one ad:

Shawsheen
Galleries, dealers, artworks
and auction results on artnet
www.artnet.com
However, when I went to artnet.com and searched on Shawsheen, I got zero results.

Oddly, Concord River got me no ads either. You'd think amazon would be trying to sell me the Concord River too. After all it is part of the title of a work by that (sarcasm alert, sarcasm alert) little known hermit who hung out at Walden Pond and wrote about his trip on the Merrimack River.

Since I'm not in the mood to buy any rivers at all, I had best give this experiment a rest for tonight.
No comments: Links to this post
Email ThisBlogThis!Share to TwitterShare to FacebookShare to Pinterest

NECN loves to cover storms from Salisbury Beach. Check out today's video from the beach. Not sure when the jetty became a "break wall". Maybe she meant breakwater. I think this is the first "oh no, Salisbury Beach is in peril" video in years that doesn't show my brother's house. Good view of the jetty of death though.

They love to cover Plum Island beach erosion too. Check out yesterday's video from the island. Note obligatory comparison to Blizzard of '78. This storm is definitely no Blizzard of '78. At least they put the reporter in PI Center at Angie's service station instead of in the water. :-) Yes, they really did used to have gas pumps until a few years ago.
No comments: Links to this post
Email ThisBlogThis!Share to TwitterShare to FacebookShare to Pinterest
Newer Posts Older Posts Home
Subscribe to: Posts (Atom)