Whenever there's a big storm, the media rush to Plum Island to see if any houses are about to fall into the ocean. This week's storm was no exception. Here's a roundup of some of the news stories.


The Daily News of Newburyport: Emergency action approved for P.I. Sand barriers to be placed around endangered homes

There was also a good article in Dredging Today before the storm: Plum Island Beach Erosion Concerns Residents
No comments: Links to this post
Email ThisBlogThis!Share to TwitterShare to FacebookShare to Pinterest

I'm beginning to think there is something about the Merrimack River and its tributary, the Concord, that induces people to behave strangely. I can't believe how many stories there are every year about people jumping off bridges to avoid police around here.

A clear sign of lack of sobriety is jumping into the Merrimack to avoid a sobriety checkpoint:
Man rescued after jump from Lawrence bridge » Latest News » EagleTribune.com, North Andover, MA

Even weirder than jumping off a bridge to avoid a sobriety checkpoint is jumping off a bridge to avoid being pulled over for running a stop sign: http://www.thesunblog.com/policeblog/archives/2010/12/really-bad-idea.html -- not a good idea at all.
No comments: Links to this post
Email ThisBlogThis!Share to TwitterShare to FacebookShare to Pinterest DSCN1997
Originally uploaded by Captain_Peleg
Spent some time trying to get the perfect photo of icicles on a very cold night last week. I ended up liking this one the best. The soft focus on the ice and crisp shadow work well together.
No comments: Links to this post
Email ThisBlogThis!Share to TwitterShare to FacebookShare to Pinterest

I'm not really much of a twitcher but an unusal shorebird or gull on my territory will get me going.
When I saw on Twitter that there was a Northern Lapwing at Plum Island, I nearly dropped my sandwich at Perfecto's. I bolted down the rest of the sandwich, dashed home to grab binoculars, camera, and warm jacket, and drove as fast as I legally could to the refuge.
I skipped the legendary Parking Lot 1 and barely scanned the Salt Pannes on my way to the general area where the lapwing was reported. When I saw a gathering of birders at the North Pool Overlook, I did the "bird the birders" manuever and joined them. I asked if they were looking at the Northern Lapwing and they told me they were looking for it. Steve Haydock recognized my voice and claimed it had been years since he'd seen me. I reminded him that I did see him once last year at Parking Lot 1. We caught up on sightings and had a nice chat. The overlook was a veritable who's who of the local birderati. Besides Steve H., we had Doug Chickering (the Prince of Plum Island) and Lois Cooper, Tom Wetmore (all hail the King), and even Wayne Petersen. I believe this was my first wild sighting of Wayne (all others have been either at Mass Audubon events or at Scott Hecker's hurricane party at Goldenrod Cottage.) Other elite of the birderati including Dave Larson were strategically positioned where the bird was last seen.
I hung out with the gang and watched an incredible raptor show. At one point I had two rough-legged hawks, a northern harrier, and a red-tailed hawk all in sight once.  They were fun to watch. I scanned for the lapwing with no results. After a couple of hours, everybody moved on to other sites.  I worked my way down the island all the way to Sandy Point with no luck. On the way back I started taking pictures of the late fall colors looking awesome in the late afternoon light. Yes I know I said late twice.
There were some northern pintails in with the mallards and black ducks at Stage Island Pool, and loads more Canada geese overhead. Canada geese were everywhere. It looked like a major goose movement going on.

The winterberry looked awesome against the clear blue sky.   It was so windy that no birds were taking advantage of it.  (I did notice the seasonal sign at the entrance reminding people to leave the berries for the birds to eat.) Still no Northern Lapwing. I kept looking everywhere I could think of. 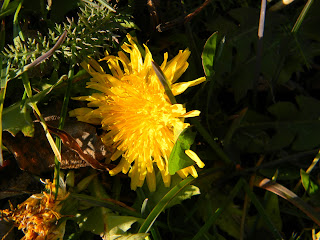 I saw a few more red-tailed hawks and another northern harrier near the Pines Trail, where I pulled off to take some more pictures. I scanned the field for about 20 minutes and as I was about to leave I saw a bird rise up from the edge of the field closest to the Bill Forward Pool and got excited. It was a largish shorebird-type bird with a yellowish brown butt and dark wings. I could see some white on the belly and the way it flew looked kind of large-shorebird-like, but I really couldn't get a good enough look to identify it. It flew north toward Hellcat. I jumped back in the car and drove to the Bill Forward blind for the best look at where I thought it was headed. No luck. Nothing.

Not ready to give up, having been teased by this mystery bird, I headed for Hellcat. The birders at Hellcat hadn't seen any sign of it. I ran into Steve again and told him what I'd seen, which was not enough to even call it a "maybe".  I hung around Hellcat after everybody left and kept looking and hoping. Sigh.

Jim Hully, who found the bird originally this morning, posted his photos on SmugMug.

I'm sure Doug Chickering will post one of his wonderful not-finding-the-bird stories on massbird.org.
No comments: Links to this post
Email ThisBlogThis!Share to TwitterShare to FacebookShare to Pinterest The winner of the window decoration competition was announced today: Chantilly Place. I'm not surprised. Their holiday window display is elegant and impressive every year.
No comments: Links to this post
Email ThisBlogThis!Share to TwitterShare to FacebookShare to Pinterest
Newer Posts Older Posts Home
Subscribe to: Posts (Atom)