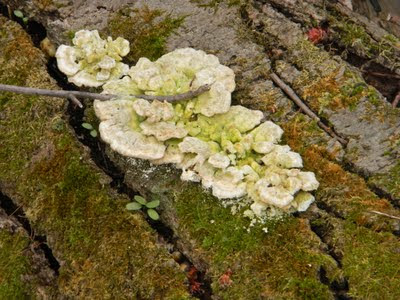 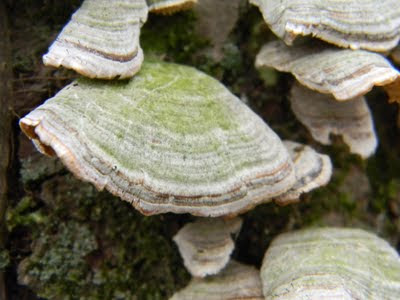 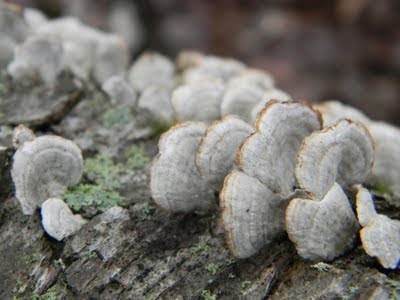 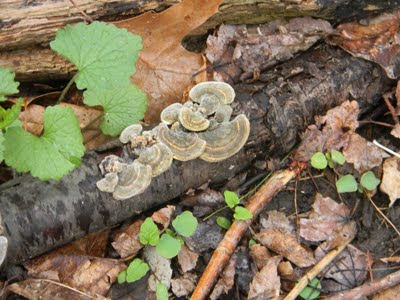 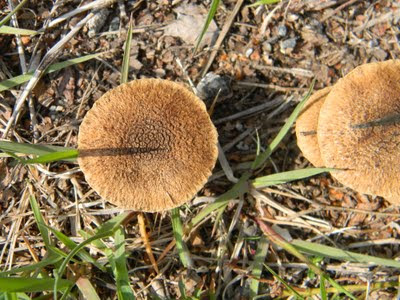 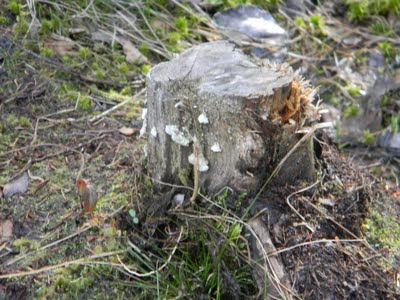 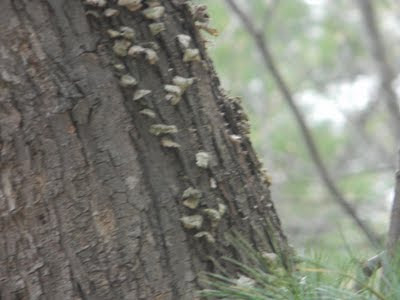 a rainy day at the heron rookery

I took a walk along the Carter Fields Trail, one of the Essex County Greenbelt trails, this morning.  Everywhere there were signs of spring and remnants of winter. The transition seems so gradual this year.
The great blue heron rookery on the North Andover/Boxford line was quietly busy with herons attending to their nests. I watched for a long time as light rain fell, redwinged blackbirds called, spring peepers and American toads sang. Once the leaf blowers and other landscaping equipment in the nearby residential neighborhood stopped, it was so quiet that I heard a chipping sparrow walking around on the leaf litter before I saw it. The quork of a raven sounded in the distance and some mallards quacked overhead.
The herons were pretty quiet until one of them landed on a nest and starting making the barking call.  A flock of redwinged blackbirds mobbed a heron as it was doing that slow stately walk they do when fishing. I've seen redwinged blackbirds mob great blues before, but usually when the heron is in flight. These guys gathered on a snag in the wetland and all went after the heron at once. It all took place just above the water.
Common grackles chased each other and chased the redwinged blackbirds. A black-capped chickadee flipped itself over on a branch. American robins descended in a group and started singing up a storm.

The rain felt soft and not terribly cold. Maybe I was just in the mood for it.  Along the trail, I could hear running water, more chickadees, more redwinged blackbirds, wood frogs, and rain hitting the forest floor.

Every once in awhile the rain let up and the forest got this moist pink glow from the tree buds.

As I headed back home,  an eastern bluebird flew across the road in front of me. A gray and rainy day can also be beautiful.
No comments: Links to this post
Email ThisBlogThis!Share to TwitterShare to FacebookShare to Pinterest

Looked at Facebook when I woke up yesterday morning and saw a photo of an ibis posted by Parker River National Wildlife Refuge. I didn't click on it to see it full size. The caption didn't say anything about species, so I assumed it was just a normal glossy ibis. Besides that, I was already on a mission for the day, having received email from Istvan that he hadn't received the Mac G4 power supply I sent him.  The numbers I was typing in to the postal service web site kept getting errors, so I went to the post office and got info from them on how to trace international packages. Finally tracked it down -- it's still in Hungarian customs. So much for the cloud solving everything. Sometimes you need to get a piece of hardware from point A to point B through customs. Anyway, by the time I was done with the power supply mission, it was mid-afternoon. For some reason I was looking at Facebook again and clicked on the ibis picture. At full size, I could see that it was a white-faced ibis.

I threw camera and binoculars in the car and drove up to the refuge. Sure enough, there was a white-faced ibis at the north end of the salt pannes.  It had attracted a fair number of birders. I watched it for a long time. It was quite active, catching fish and what looked like a crab. It really seemed to be eating up a storm. I kept hoping it would come closer to the road so I could get a decent picture -- the blogosphere has high standards for photos nowadays.
﻿﻿ ﻿﻿ The first round of birders left.  A couple of women from New Hampshire arrived. They too were wishing it would come closer for a photo op.  They asked if I'd seen a white-faced ibis on the refuge before. Yup, I'd seen one in 2007 with a flock of glossy ibis.﻿﻿

I was wishing for a really long lens or a digiscoping setup because there were multiple photo opportunities in the vicinity of the ibis. A greater and a lesser yellowlegs were foraging near each other for convenient size comparison. A killdeer was posing with its reflection  in the water. (If you view the ibis photo full size you might be able to pick out the killdeer.)
Continuing south, I encountered  redwinged blackbirds, double crested cormorants, and tons of American robins. At the Pines Trail, I saw my first two northern flickers of the season. They were foraging on the ground surrounded by American robins, common grackles, American robins, and a northern mockingbird. I looked up towards the osprey platform and spotted a lone wild turkey on the dike.

I parked at lot 5 and walked the boardwalk to platform that overlooks the beach. On the way, I spotted an eastern coyote. Said coyote spotted me too. I could see it watching me.

From the platform, I saw a big flock of funky looking long-tailed ducks diving in the surf and a line of 50 migrating double crested cormorants. I stared out over the Atlantic Ocean until I was thoroughly cold and windburned. On the way back to the gate, I saw a great egret and some more yellowlegs.

It's "Daffodil Days" at Blithewold Mansion, Gardens, and Arboretum in Bristol, RI.﻿ The daffodils are impressive, but there's so much more too see that really emphasizes the change of seasons.
﻿
﻿
﻿
﻿
﻿
﻿
﻿

Even with my hot cup of Ethiopian Yirgacheffe in hand, the wind coming off the water was so fierce that I was freezing cold. I only lasted an hour on the beach. There was nobody around, so I'm sure the piping plovers were safe without me.

Coffee of the Day: Ethiopian Yirgacheffe
Bird of the Day: long-tailed duck
Invisi-bird status: they are here and have been seen but not by me
Wierd Wrack Item of the Day: Hooksett disc (OK, it's getting to be normal.)

We got a new sign since last week. Maybe if people see how cute the chicks are, they'll be more inclined to respect the beach closure. Not sure signage works for dogs though.

I would have listed these blue barrels as wrack item of the day but they weren't on the beach. They were floating around in the marsh and in the Plum Island River. I saw one on the road near the Joppa Flats Mass Audubon center too. I don't know if they originated in the road and washed into the river or vice versa.

Part of the beauty of Plum Island is the variety of rocks and the amazing colors of the sand.  I could spend days just photographing rocks at low tide.  These are just a few of my recent rock and sand photos.


﻿﻿
﻿﻿I really wondered if the tide placed this rock upright like this or it had human help. People are always making impromptu sculptures out of stuff on the beach, but this looked like it could've ended up this way naturally.
There are so many colors in the rocks and in the sand that it almost makes me wish I could paint.
And yes, contrary to Mark Obmascik's mention of Plum Island in The Big Year: A Tale of Man, Nature, and Fowl Obsession, the beaches on Plum Island are definitely not made of white sand. I don't think the fork-tailed flycatcher story (the chapter titled Forked) is included in the part that got made into the movie anyway.

On Friday I finally got to do my first plover warden shift of the season.  I didn't do it last week on account of snow. It was a gorgeous beach day. It was also my birthday (one ending in a 0).  I treated myself to breakfast at The Fish Tale and then stopped at Plum Island Coffee Roasters to pick up my beach coffee.

Coffee of the Day: Ethiopian Yirgacheffe
Bird of the Day: tree swallow
Wierd Wrack Item of the Day: Hooksett discs
Invisi-bird Status: arriving
Number of Invisi-birds Actually Seen by Me: none

I saw my first tree swallows of the season, 6 of them, perched on the old purple martin house at Parking Lot #1. They flew over to the beach shortly thereafter to feast on the bugs in the wrack.  The tide was still going out when I arrived so there was a lot of beach to keep an eye on.

Most of the people and dogs were reasonably well-behaved. I did have a group of three people who each had a dog come onto the refuge beach from the Newbury town beach.  I simply told them that dogs are not allowed on a national wildlife refuge. Period. I repeated it again. They left the refuge. I intimidated a couple more unleashed dogs that had gotten out ahead of their people. None of them made it even close to the closed area.
I encountered one visitor from Oregon who was staying at Blue and didn't know about the beach closure. She'd never heard of the piping plover so I got to tell her all about the cutest birds on the planet. She was very excited and was going to read more about them online back at the hotel. She also commented on how gentle the beach and the surf  are compared to the rugged Oregon coast. The waves were pretty small and the tide was going out, so I can see how the surf seemed gentle. The wind was starting to blow really hard from the east so I suspect the incoming tide wasn't going to look so gentle even to somebody from Oregon.
Between visitors, I walked along the wrack line. There are still tons of those discs from the Hooksett sewage treatment plant in the wrack along with all the other kinds of plastic junk that washes up.
The bird action was pretty light. I did see some long-tailed ducks, a couple of horned grebes, double crested cormorants, great black backs, and my friends the tree swallows.  I also saw a couple of great egrets in the marsh just past the gatehouse on my way out.


The birthday celebration continued with lunch at Mad Martha's, watching the Red Sox vs. Yankees on tv, and Indian takeout with my family at the Beach Boys' house on Salisbury Beach.  It was a long but satisfying day.
No comments: Links to this post
Email ThisBlogThis!Share to TwitterShare to FacebookShare to Pinterest I took this on Sunday at Blithewold, Bristol, RI.