Saw this large banana-like thing sitting just inside the back door of Warren Antiques Market during Walkabout Warren. Was unable to resist going into the shop. 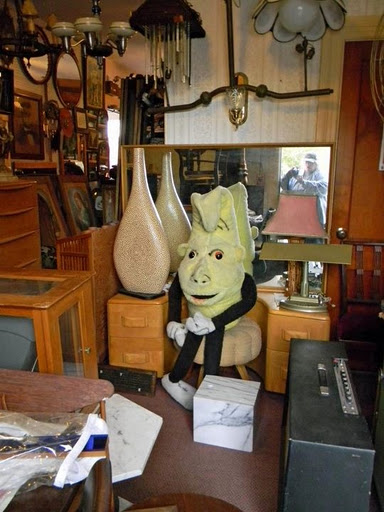 Ever since I first spotted the squash blossoms in the wrack between lots 6 and 7, I've been wondering what the fruits would look like. One afternoon last week, I went to take a look.

A few of the plants had these little round gourds on them.

Some still had blossoms, but I could see the fruit forming.There were tons and tons of peeps of various kinds. Hundreds of sanderlings were dining at the water line. There were a few other species mixed in with the sanderlings, but I couldn't quite make them out in the crowd.
Semipalmated sandpipers were foraging in the tide pools. I've never seen that before. They were running around between the rocks.

It's funny. As I walked from the wrack to the water, I was more aware than usual of the different zones of life on the beach. The tide pools struck me as a much different place from the wrack line. I should gather my thoughts on that and write some more about it.