but where are the gulls?

What a weekend! What a study in contrasts! Saturday was one of those clear blue days that people move to New England for. Sunday it was one of those days when it rains sideways and you shiver in your wet sweatshirt wondering why you came.

We timed our arrival on Saturday to see Sharks Come Cruisin' at 1:00. They commented on
how lucky they were to have such great weather this year after playing the rain last year.
They even mentioned last year's rain in a song. They rocked! Then it was over to the dining tent for some lunch. We got back to the main tent in time to catch some of "Something Fishy", which was Jon Campbell, Dave Densmore, Jim McGrath, and Bob Quinn all on the same stage. We were so taken with Bob Quinn, whom we'd never heard before, that we caught his next recitation at the narrative tent. He's an excellent storyteller and has that cool Maine accent. He reads his Uncle Bonney's poems and tells his own stories of life on Eagle Island. When he was about to read a poem about gulls, he commented on the lack of gulls around today (Saturday). Bob Quinn
The theme of the festival this year is farming and fishing so they had a surf and turf poetry pairing of David Densmore, fisherpoet, and Joel Nelson, cowboy poet. Both poets left me wanting more. Sunday was a whole 'nother thing. I ended up, after much discussion and indecision, going alone. I really wanted to hear more of Joel Nelson, which I did, and Sunday was also my only chance to hear the Ana Vinagre Ensemble. I need my dose of fado. What can I say? Ana Vinagre was well worth the trek across the pedestrian bridge while trying to keep my umbrella from flying onto the highway. Ana Vinagre commented on the scarcity of gulls today (Sunday). Actually, she said gaviota -- I guess the Portuguese word for gull is the same as the Spanish word.

The "Of Land and Sea" session again combined "surf and turf" with Joel Nelson, Bob Quinn, Good Old Plough, and Dave Densmore along with The Johnson Girls. One highlight for me was when Dave Densmore read a poem about being stuck in boat with engine trouble with his teacher, who managed to lose the oars, while his Dad tried to get the outboard working. Bob Quinn played off that with a story about trying to get an engine started and accidentally blowing it up. Another highlight was a luminous Joel Nelson poem about finding an arrowhead. So I met my goal of getting my dose of fado and hearing more of Joel Nelson. So where were the gulls? They were scarce on both Saturday and Sunday as both Bob Quinn and Ana Vinagre commented. I guess the wind must have driven them inland. Maybe it should have driven me inland (just kidding). I think I saw two herring gulls and one great black back the entire weekend. Normally, the New Bedford waterfront is dominated by gulls. They are everywhere. When you look down from the parking garage onto the roofs of buildings you see lots and lots of shell fragments dropped there in the process of gulls cracking open quahogs, mussels, and whatever all else shellfish they scrounge up. The roofs of New Bedford look like it snowed shell fragments. It snows shells and rains gull feathers. 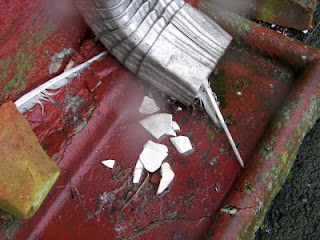 Feathers and Shell Fragments
On the way back to the garage I tried to take a few pictures of New Bedford in the rain while trying not to lose my umbrella. There were gull feathers and shell fragments in every gutter and gully. 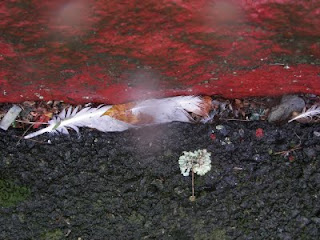 My Umbrella Landed Next to a Happy Face

2 comments:
Email ThisBlogThis!Share to TwitterShare to FacebookShare to Pinterest

Sometimes Google's idea of relevant ads cracks me up. I recently searched on "piping plover" in Google News and got plenty of relevant hits but the ads, well, go figure:

What did I expect? I ran the Google Adwords keyword tool on this blog and it recommended deep sea fishing. OK, so I do mention fish and fishing but it's surf fishing and the entries that mention fish often even explicitly use the word surfcasting. Maybe it's all the mentions of bait...

2 comments:
Email ThisBlogThis!Share to TwitterShare to FacebookShare to Pinterest

Strange how what used to be work is now a weekend's amusement. At least they're preserving the history. Maybe now people will spell hay staddle correctly despite Microsoft's spellchecker's insistence that there's no such word. They should have an exhibit of Martin Johnson Heade paintings to coincide with this.
No comments:
Email ThisBlogThis!Share to TwitterShare to FacebookShare to Pinterest

yet more "stuff in the Merrimack"

Nashuatelegraph.com: Nashua fisherman hooks what he believes was a 6-foot gator

Now that's a fish story! The "one that got away" writ large! This veers into urban legend territory. On the other hand, I suppose it's no less believable than an SUV with the keys still in it.
No comments:
Email ThisBlogThis!Share to TwitterShare to FacebookShare to Pinterest

I thought I was way late posting about the parachute jump thing on the beach but not as late as 2B2 Flyby who just got around to it in his catch-up post. The view from the airport sure was different from my view from the beach. At least he got a picture of one of the jumpers. I was too busy trying to figure out whether they were about to land on the refuge, had already landed on the refuge, or otherwise fall afoul of federal law. Next year I am definitely joining them for breakfast at the airport before I watch them fall from the sky.
No comments:
Email ThisBlogThis!Share to TwitterShare to FacebookShare to Pinterest

Mass Audubon's Joppa Flats sanctuary is hosting two interns from Belize for a month. It's a great time for them to be here and judging from these two articles in the Newburyport Daily News they're getting a lot of great experience.

Here's what the program is about:
A natural connection - NewburyportNews.com, Newburyport, MA

Posted using ShareThis
No comments:
Email ThisBlogThis!Share to TwitterShare to FacebookShare to Pinterest

Posted using ShareThis
No comments:
Email ThisBlogThis!Share to TwitterShare to FacebookShare to Pinterest

As far as I can tell, Google Maps is the source of the mistake. That is, the other incorrect references seem to refer back to Google Maps. So, has somebody at Google renamed a Massachusetts state park base on what strings people search for rather than what the place is actually named? Fascinating.
No comments:
Email ThisBlogThis!Share to TwitterShare to FacebookShare to Pinterest

yet more stuff in the merrimack

See this archival Plover Warden Diaries entry for why I hope they have learned their lesson about where to bury stinking, rotting whale flesh.

And finally, I'm not sure if you can count a whole town as stuff in the river, but the Nashua Telegraph has a great archival picture of the town of Litchfield, NH inundated by the Merrimack in 1936.

Fear not, dear readers, I will resume posting about coffee and gulls and shorebirds as soon as my day job and family activities allow me a little time to breathe (and smell the coffee).
No comments:
Email ThisBlogThis!Share to TwitterShare to FacebookShare to Pinterest

more stuff in the river

The latest stuff pulled out of the Merrimack River:

Remarkably incomplete article. What was he doing in the river? Why is "tired" a reason for hospital evaluation? Not good reporting.


Shark steaks for all in Haverhill.

Getting way tired of piping plover recipes in the comments section of every news article that so much as mentions the invisi-bird in passing. Especially tired of a certain Newburyport paper's sloppy reporting. If you're going to misquote a state agency, at least get the name of the agency right.
No comments:
Email ThisBlogThis!Share to TwitterShare to FacebookShare to Pinterest

stuff in the Merrimack

Thank goodness not everything that gets washed, dumped, or driven into the Merrimack River ends up on the beach at Plum Island. In addition to the usual tires, shopping carts, and of course the bodies of people killed in boating accidents, some interesting things have been pulled from the river lately:
Particularly fascinating is the 2007 BMW SUV with the keys still in it. Can you say "insurance fraud" boys and girls? I knew you could.