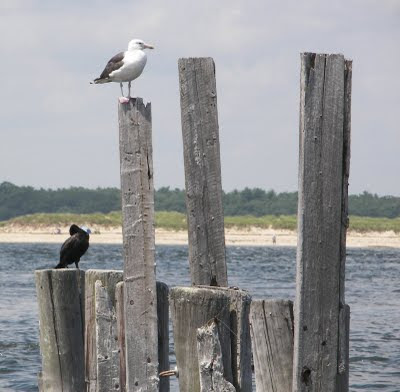 Gull and Cormorant: July 25
Coffee of the Day: French Roast Colombian. 2 weeks in a row? I must not be the only Saturday customer who likes it.
Bird of the Day: homo skydiverus -- skydiving humans with big parachutes
Invisi-bird Status: Still no new update in the box. Last one was from 6/18. Number seen by me: zero. Though I did hear tell that they are gathering at Sandy Point prior to departure.
Strange Wrack Item of the Day: skydiver's boot falling from the sky. Does it count as wrack if it came from the sky and not the ocean?

It's a gorgeous day, complete with a pleasant breeze to keep the greenheads down. This is arguably the best day of the summer so far. Bird action is fairly light. No masses of gulls roosting just far enough away to be unidentifiable. No invisi-birds. Not even the usual bait-stealing common grackle. Too bad for that bait-loving grackle because there are plenty of surf fishing people. 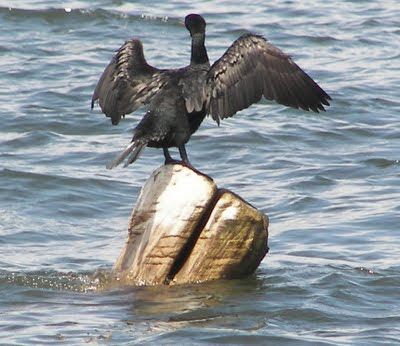 There's some kind of parachuting event going on today. They did this last year too, I remember. Unit 61 radios me to keep an eye on where the parachuters land -- that is, that they DO NOT land on the refuge. There's a clearly marked landing area on the town beach with big flags to show the wind direction.

The beach has kind of a steep drop-off between where I setup and the low tide line. I'm standing down on the wet sand talking to a woman who is learning to surfcast and keeps wandering into the closed area after her errant casts, so I'm below the drop-off/berm/whatever. Parachuters come swooping in over the closed area then over my head and onward to the designated landing area. A guy with an orange and yellow striped chute is way off course and comes pretty low over the refuge. It's gonna be close. From where I'm standing I can't really tell whether he made it to the landing area but it looks like he just made it past the refuge boundary. Unit 61 radios me asking if the orange and yellow striped guy landed on the refuge. I tell him I think he made it past the sign. Later I suddenly remember my high school physics lesson on parallax.

61 is on the trail of where the guy landed. Meanwhile, a couple parachuting in tandem swoops over, one holding on to the feet of the other. They evidently aren't too expert at it because one of the guy's boots falls off. Fortunately, it didn't brain any beachgoers. Equally fortunately, the tandem jumpers landed safely and not on the refuge. The woman who was learning to surfcast kept asking "Did you see that?" "Yeah. Weirdest thing on the beach today by far."

I caught up with 61, who had found the landing print of the orange and yellow striped guy and found a witness who saw where he landed from a better angle than I did. Ticket time for that guy. Later it turns out he's the same guy who landed in the water last year. I guess he needs more practice.

After my shift was over, I had lunch at Plum Crazy and regaled the waitress with tales of the boot falling from the sky. She said her boyfriend wanted her to try tandem skydiving but now she was having second thoughts.

Instead of heading right back into town after lunch, I drove up to the northern tip of the island to see if I could get a good view of the tall ships anchored off Salisbury Beach for the Sand and Sea Festival. There were three of them, of which I got a nice view of two. 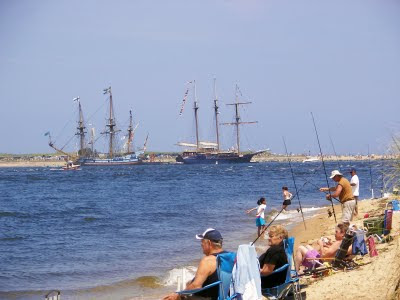 As if that weren't enough for one day, I stop off at the airport on the way back into town and watch a couple of vintage planes landing. The skydiving people are having a cookout and I am tempted to sneak some corn on the cob, but I don't.

Back in town I stimulate the economy with a huge pile of books at Jabberwocky, including the new Donald Kroodsma book and Bernd Heinrich's book about summer. When I will find time to read them, I do not know as I am off to the Lowell Folk Festival tonight for the rest of the weekend.