the bait is coming 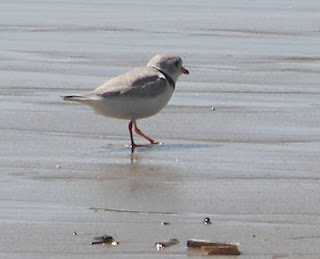 Didn't spill my coffee. Saw at least one invisi-bird (picture above). Weather was perfect. All visitors were well-behaved. There were no dogs. Who could ask for anything more? OK, so maybe I could've asked for one of Tom Wetmore's roseate terns or Manx shearwaters but that would be sooooo gilding the lily... After an intense week of way too much to do in too little time at Gray Cubicle World, it felt great to be on the beach.

Once again, Kids Fishing Day, now called Go Fish!, sneaked up on me. Being North this time, my only contact with it was hearing the radio chatter going back and forth. Normally, the most common words heard on the PRNWR radios are "Sandy Point is full", next most common is probably "Lot 7 is full", and so on up the list of parking lots. However, today is the first time I have ever overheard the words "The bait is coming." Gotta have bait for kids fishing day. Gotta have poles, line, and a casting instructor too. I monitored the progress of these items on the radio while I kept my eye out for trespassers, dogs, intertidal yoga people, and the great New England BwTBC birding event. OK, so I wasn't really expecting the intertidal yoga people to reappear, especially with all the people fishing, but I just had to use that term again.

When the BwTBC folks arrived I told Christopher (picusblog) about the kids fishing event and suggested heading south first. Sometime later,of course, I heard the famous words "Sandy Point is full" on the radio. Go fish. By the way nobody on the north beach was catching a thing.

Had a teachable moment with a little girl who kept trying to run into the closed area. I showed her a picture of a piping plover and explained how we need to take care of them. She got really interested. Her grandparents thanked me.

Met up with the BwTBC folks at Hellcat for a group photo. Hung with them for awhile and enjoyed fabulous up close and personal views of a savannah sparrow singing its little heart out at the North Pool overlook. By the time we reached the salt pannes (I spell it the traditional New England way), a wave of fatigue hit me. I blamed it on staying up late to watch the Red Sox beat Philly in 13 innings followed by getting up early and spending the morning on the beach talking about piping plovers but I think it had more to do with the cumulative fatigue of the past few weeks of Gray Cubicle World work. So, alas and alack, I gave up on the idea of accompanying them to NH for the Mississippi kites.

It was a treat to meet all these birders who tweet.

It was great to meet you during the BwTBC event. I think your job protecting the nesting birds is great!

I believe my wife and I met you several years ago at Sandy Point.