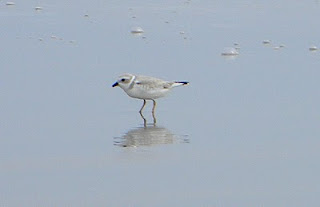 Hey, look at me! I'm all grown up. Bring on migration! But first I must eat lots of nutritious worms and baitfish and crustaceans and insects, oh my! 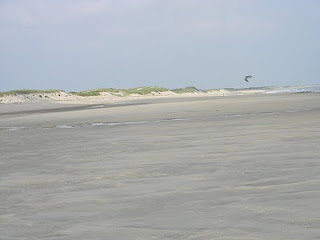 Lots of sand exposed at low tide. That spec in the mid-upper right is a great black back.
As you can tell from the above picture, I was south today. First time this season. It was pretty quiet with only 3 visitors and loads and loads of shorebirds. The "great greene flye" didn't bother me much on the beach. I really only had to dodge them on the boardwalk to the beach from lot 6. That wasn't the only thing I had to dodge, as the boardwalk is finally getting repaired. Alas that meant I had to pick my way among newly cut stumps, uncut brush, strategically pre-deployed nails and screws, lumber, and the post-hole digger. And that was all in about the first 20 feet. (Well, the strategically pre-deployed nails and screws were all along the boardwalk and I may have knocked some of them through the cracks by accident, though I hope not.)

The universe rewarded the trek through the boardwalk construction with good looks at a piping plover fledgling foraging along the waterline among sanderlings, semipalmated sandpipers, and other peeps. The peeps are definitely massing for migration. The flock got bigger and bigger all morning, but no other piping plovers joined it. 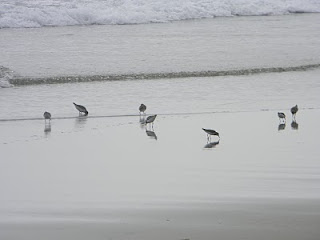 One fisherman was working two rods and promised me he would show me a big striped bass within the hour. Amazingly he did. Three of 'em actually. The conversation went something like this:
Me: "What are you using for bait?"
Him: "Worms."
Me: "I heard they're taking clams."
Him: "These are magic worms."
Me: "Did you get them at Surfland?"
Him: "Yup, they're personally blessed by Kay."
Me: "Oh, then I guess they really are magic." 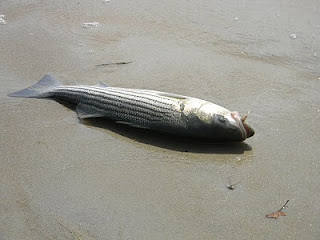 Striper about to be returned to the water.
For the uninitiated, Kay has been the proprietor of Surfland for all of recorded history. The movie Reel People features Kay and Surfland and the fishermen of Plum Island (including our own Unit 61). I wrote about it last year. When I sent a DVD of it to my brother in Dubai, I told him I was imagining the customs officials trying to make sense of a magical island where people worship striped bass and are ruled by a woman who sells bait. 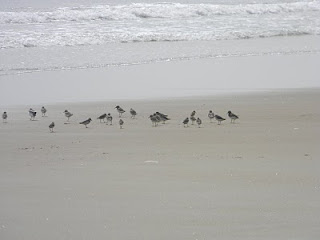 Shorebirds
The shorebirds weren't the only ones gathering for migration. The tree swallows and eastern kingbirds are forming flocks too. There was a lot of swirling swallow action along the refuge road as I was driving back to the gatehouse. It seems like summer just started and yet here it is time for the fall migration to start. Time goes by so fast.

In other news, I finally got to meet the refuge intern who goes to school with my niece at Barnard. We had a nice family dinner and game of Bananagrams at the Beach Boys' house (the boys were on vacation at Fire Island -- go figure, they live on the beach and they go to a different beach for vacation) with my Mom, both of the local nieces (the Dubai ones are, well, in Dubai, and only 3, and busy plotting world domination), the intern who's friends with my niece, and the other intern (her trailer mate). That was after last week's shift and it lasted late into the night so after a very long day I never got around to writing about the shift. There's not much to say about last week's shift at this point except that I saw Science Fiction Fishing Guy for the first time this season. We had fun catching up. He didn't catch anything except greenhead bites. I did get a great picture of a ring-billed gull eating a tiny crustacean it dug out of the sand. 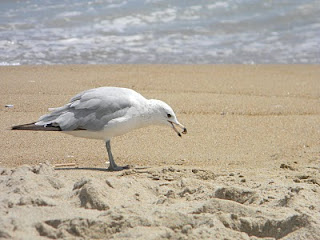 Oh, and last Friday's coffee was Ethiopian Yirgacheffe again. I still don't know how to spell it. Speaking of spelling, I wish the spellchecker would stop trying to change stripers to strippers. Really.
Email ThisBlogThis!Share to TwitterShare to FacebookShare to Pinterest

Hi Janet, I made it out to Plum Island yesterday and no greenheads!! I was all prepared with long-sleeved shirt etc. I arrived at Sandy Point at 7 AM and saw many Piping Plovers, mostly juveniles and 2 chicks. Didn't count them, was too busy taking pics. Check out my blog. Next one will be about the terns that I saw, the osprey and and... so much to see!