stuff in the merrimack -- dredging equipment

The dredging of the mouth of the Merrimack has begun. There's lots of equipment in the river between Salisbury Beach and the northern tip of Plum Island right now. The mother ship is The Illinois belonging to Great Lakes Dredge & Dock Co. The Illinois is surrounded by satellite vessels of various types and lots of pipes and hose-like things. They're pumping the dredged sand from the river onto Salisbury Beach. I guess after Salisbury gets its share, they'll pump onto Plum Island. I made a quick excursion to Plum Island Point for a good view of all the cool equipment before heading down to Cambridge for Mass Innovation Night. Cool dredging projects always start the same day as Mass Innovation Night, right? :-) (See my tech writer blog for info on Mass Innovation Night: http://eganwriter.blogspot.com/) 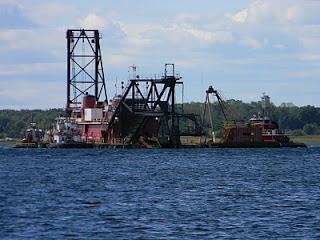 It was hard to get a photo that showed how big the hose is. I kept hoping a kayak would paddle up next to it or something to convey the scale. The vehicles in the campground are too far away to really show the scale. 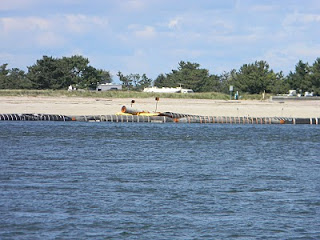 Big Hose-Like Pipe Thing Near the Campground
I wondered if any seals would haul out on top of the pipe instead of on the rocks or the beach. Probably not. 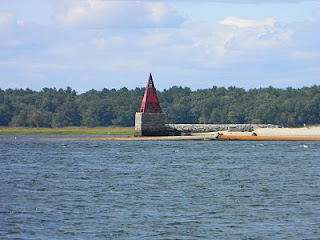 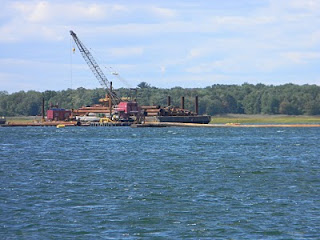 Pipes and Ships
Some press coverage of the dredging: