It was sunny and warmish at my house. Not so on Plum Island. Clouds loomed to the north and east even though there was blue sky to the west and south when I arrived at 8:00AM. I knew the weather was going to get more interesting when I saw that the huge flock of gulls circling over the beach just to the south of the .1 mile marker was mostly great black backs. When the great black backs come ashore in large numbers we're in for weather from the northeast. Sure enough, when I got down onto the beach I felt the wind coming from the north-northeast. The wind picked up and the clouds moved closer surprisingly quickly. By 9:00AM it was completely overcast all along the island. 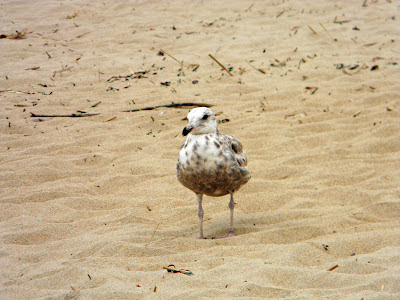 There were a few people fishing, but not catching much. Common and least terns were catching plenty though. There was a steady stream of visitors, most of whom didn't stay long as it got colder and colder in the wind.  June 16 and I'm wishing I'd brought gloves!  I did get to explain the piping plover life cycle to a few people and chase down one jogger made oblivious to signage by her iPod (what is it with headphones rendering people unable to read signs?)


A few common grackles showed up to poke around in the wrack. One of them might have been the official bait-stealing grackle as it showed great interest in the fisherman's coolers and bait buckets and it did have a kind of funky tail feather, though not as pronounced as the one we were talking about last week.  The grackles showed extraordinary interest in a newspaper wrapped around a pile of seaweed -- kind of a wrack wrap.


Birders came and went. Tom Wetmore stuck around for awhile and confirmed that there weren't many birds around that weren't gulls or terns. He was wearing gloves. I was jealous. One of the fishermen finally caught a flounder. The clouds got thicker. The wind got stronger. I found a couple of Hooksett discs. Yup, they're still here.

I wanted to stop at my favorite historic aerodrome to watch the model jet rally, but my next activity for the day was my cousin's birthday party in Maynard, which is a long way from Newburyport. I did see a couple of model jets in flight and what looked like the beginning of the best smoke contest on my way past. Felafel at Revitalive and a quick trip to Chococoa Baking, which is now conveniently located in the Tannery, to get mini-whoopie pies to bring to the party, and I was back on the road.
Email ThisBlogThis!Share to TwitterShare to FacebookShare to Pinterest