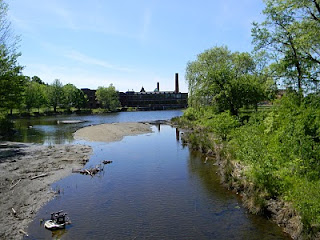 "Attractive" Mill Pond
The web site for the East Mill in North Andover advertises "spectacular brick & beam space set around an attractive mill pond. " I don't know how attractive the pond is to humans, what with all the wrecked office furniture in it since the flood, but it sure is attractive to birds and turtles. I birded there for awhile yesterday. The usual suspects, Canada geese, American robins, European starlings, and common grackles were all over the place. 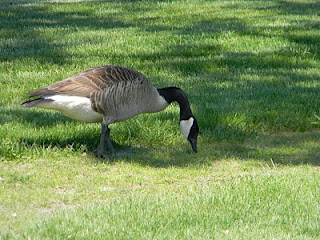 Canada Goose
Last Saturday when Nancy and I went there for pizza at Stachey's, there were two families of Canada Geese with goslings. Yesterday, no goslings were in evidence. There was, however, a domestic goose hanging out with the crowd. 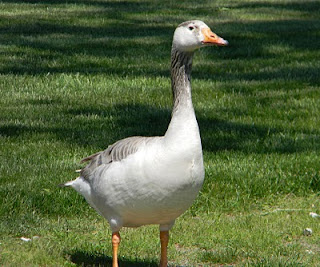 Domestic Goose
Turtles were sunning themselves on every available surface, logs, rocks, old tires. Barn swallows, tree swallows, and a couple of northern rough-winged swallows swooped over the pond catching flies. I heard a killdeer somewhere in the distance but didn't see it. A flock of 4 solitary sandpipers landed on the mud near the old tire full of turtles. That was the surprise bird of the day. 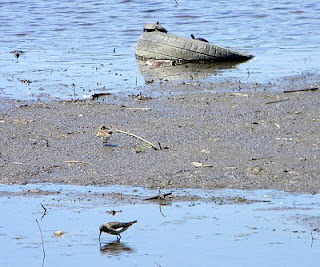 Solitary Sandpipers with Turtles on Tire
The tire was very attractive to turtles. Every time I looked at it, there were more of them. At one point there were 6 turtles perched on the tire and at least one swimming next to it. The solitary sandpipers were very active, moving from mud to water back to mud. While on the wooded side of the pond trying to photograph the sandpipers, I heard a yellow warbler but did not see it. And I never did find the killdeer I kept hearing. I think it was actually across the pond near the parking lot. 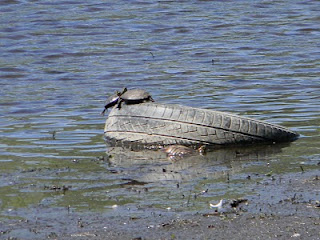 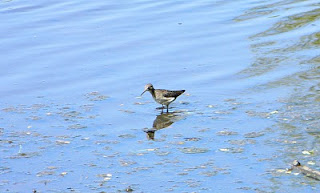 I'm not used to the new camera yet, so the exposures are a little off. The shadows on those sandpipers make them look darker than they appeared in real life.
Email ThisBlogThis!Share to TwitterShare to FacebookShare to Pinterest