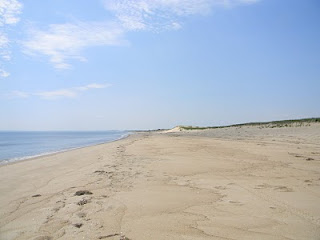 view to the south
Coffee of the Day: Sumatra
Bird of the Day: least tern
Weird Wrack Item of the Day: hmm, nothing unusual - come to think of it the lack of anything unusual is, well, unusual
Coast Guard Assets Sighted: none but Unit 61 gave me a detailed description of a drift buoy that the Coast Guard deployed in the search for the missing woman
Invisi-Bird Status: Refuge beach: 5 pairs, 18 eggs! Sandy Point: 2 pairs. Number actually seen by me: zero.

I was prepared to be way busy today. After all, it's Memorial Day weekend and a gorgeous day. However, after an initial surge of visitor action at the beginning of my shift things were pretty quiet. I did have to intercept one jogger who was oblivious to the boundary. It continues to amaze me how the iPod renders people unable to read. 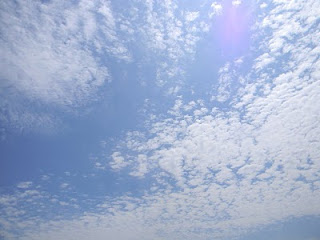 Least terns are back and they are showing every sign of setting up housekeeping near the .2 mile marker. When I first arrived I noticed one least tern diving for fish and constantly returning to the same spot at the base of the dune. As the morning wore on I noticed a few more least terns all gravitating to that spot. They'd fly out over the water, dive, catch fish, and return with fish in beak to the area between .1 and .2. I got very excited. This could mean nesting. They were hanging out close to a spot where there has sometimes been a least tern colony in the past. The least tern action continued all morning.

Offshore there was a bird extravaganza in progress: northern gannets, great black backs, herring gulls, double crested cormorants, least terns, common terns, and even a greater shearwater were all fishing like crazy in one spot. This attracted some human fishermen too. I was hoping to see storm petrels and maybe some other types of shearwaters but couldn't identify any in the frenzy. It struck me as hilariously funny to watch a least tern dive into the water just a few feet away from a northern gannet, the size difference is so great. I couldn't tell how the human anglers on the two boats anchored nearby were doing, but the surfcasters on shore were having excellent luck. In my first two hours I saw people land 5 striped bass. All big. All keepers.

Unit 61 came by on his way to search the refuge beach for the body of the woman who got swept away at the mouth of the Merrimack earlier in the week. He told me about recovering the device that the Coast Guard deployed so they could see where the buoy drifted to and get an idea of where the current may have taken her. He described it in detail and drew a picture in the sand. Pretty high tech. We had great conversation about fish (stripers and flounder) and I told him about the least terns. I did not envy his assignment to look for the body. 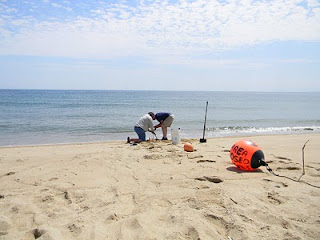 volunteers putting in the buoys to mark the north boundary

Unit 9 (who used to be 3) came by to give me the latest update on the invisi-birds from the field. Great news: 5 pairs, 18 eggs. They re-nested after the immense high tide the previous week. Yay! Two pairs at Sandy Point too - not sure whether they have eggs. I told her about the least terns too. I put it in my report, but I wanted to make sure as many refuge staff as possible knew about the exciting least tern action as soon as possible in case they start laying eggs soon.

A couple of volunteers came by to put in the buoys to mark the boundary. I'd been wondering if we were going to have those this year. By the time they got there it was almost high tide so they didn't get to run them all the way to the low tide line. I still fantasize about some kind of retractable line that could be deployed at low tide. Maybe I can design a beach going robot to move signs back and forth... or maybe I could design a robot plover warden, after all we're just talking signs (well, talking signs who can chase people and dogs).

I told them about the least terns too. And, of course, we talked about the three deaths in the Merrimack in one week: the young woman who was swept away from the sandbar, the guy who fell in at Cove Marina (apparently he had a heart attack), and the teenage boy who drowned in Lawrence. I hope they find that young woman's body. The Merrimack can take months to give up its dead. 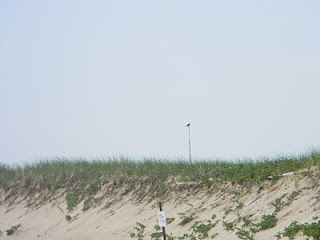 Besides sea and shorebirds, the beach attracts a lot of swallows and flycatcher type birds 'cause there are a lot of flying insects. Over the past 3 years I've noticed that eastern kingbirds especially like the area around the .1 mile marker as opposed to anywhere else along the beach near parking lot 1. There are often 2 or more of them there. Last year when there was a piping plover nest near there, I noticed the kingbirds always came back after the plovers chased them away. Today I watched two of them hunt: one from a perch on the mile marker and one from a perch on the area closed sign. They didn't fly around hawking bugs, they waited for them to pass nearby. They'd fly off the perch, do some kind of mid-air flycatching maneuver and then land on the perch again. I'd never really seen them do that before. There's so much more to learn about even very common birds.
Email ThisBlogThis!Share to TwitterShare to FacebookShare to Pinterest